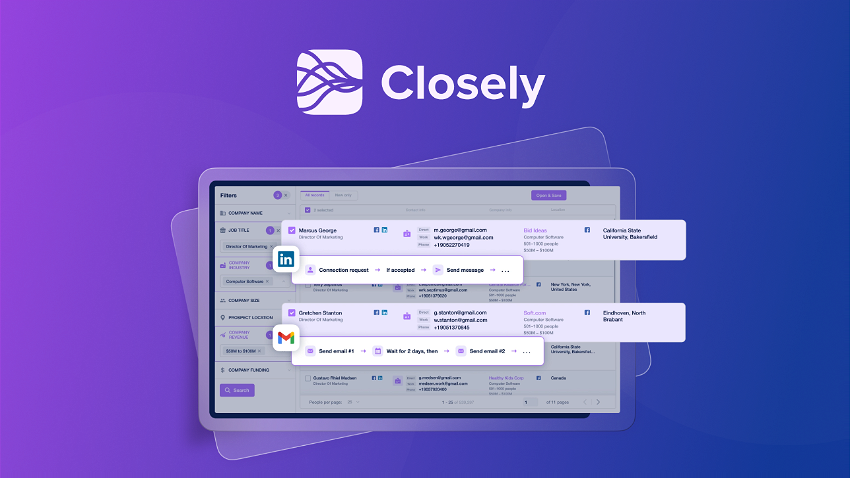 This deal is unavailable (a bummer, we know). Don't miss a great deal again — drop your email to get all our latest tools!

Closely is a cloud-based lead engagement platform for LinkedIn with dedicated residential proxies. Put outreach activities on autopilot so you can focus on what matters the most — closing deals.

This deal is unavailable (a bummer, we know). Don't miss a great deal again — drop your email to get all our latest tools!

Create videos for outreach campaigns and track interactions at scale

Boost your productivity in Gmail with an AI-powered email assistant

A simple, repeatable sales system that gets you conversations with potential customers all the time

Please login to leave a review.

One of the safest to use for LI automation

It is safest because it assigns one IP to each account which only very few tools do.

Waalaxy has a cloud workaround but not that great a bit of techie option so Closely is better it does lack a few advanced features but it gets the job done.

They are not giving Future Email outreach to Appsumo LTD Buyers

As per Appsumo you will get : All future Closely LinkedIn Automation Plan updates

but Alex revealed in a question that they will not be providing Auto Email outreach to Appsumo LTD buyers.

What else would they not provide ?

Many contradictions may appear.

Hi there. Sorry this came as a sad surprise. We specifically mentioned "Linkedin Automation" updates. Email marketing is not Linkedin automation.

On a flip side. We have delivered TONS of updates to the set of features that are included in this deal and will continue to do so.

I have been advised to work on my linkedin profile as a source of business.

i am lazy but want safe automation.

Closely outperforms all my needs in these 2 areas. I am really falling in love again with Linkedin thanks to the guidance of closely.

Give it a try, you will not regret it.

I have a few other LinkedIn automation tools already, but Closely is my favourite and the reason is simple: intuitively, easy to use, set and forget in the cloud.

You don't need to keep logging into LinkedIn for the automation to start which is a huge time saver.

I grew my network to 3000 in 2 months without setting high limits.

What You'll Want to Know

So for starters, some of my roles previously and currently have been security in IT. So a couple things you'll want to know right off the bat is:

You have to provide your LinkedIn Username/Password.

- I don't believe the automation they're providing is possible via API, so that's ok.

They don't currently have MFA options, at least not that I can tell.

Their app mimic's human behavior, which means it's only going to be so fast, and they have a ramp up thing to protect your account that makes it slower in the onset, and faster as days go on, with limitations on what LinkedIn allows.

Their database of information appears less complete than other tools I've used. Like SalesQL

You can't automate posts to your wall/board.

I can't see a way to add conditional statements: e.g. if contact responds to direct message, stop campaign for this contact.

Really intuitive and clean UI. Simple enough, and empowering with the variables.

Part of the mimicking human behavior, is I honestly believe they care a lot about not getting you banned. They're willing to upset a couple people with it not going "fast", for the sake of ensuring their app automates day-to-day operations vs acts like a supercomputer and ends with you banned thus making the point of the app moot.

The above makes me think maybe they care heavily on the security front as well, but that's conjecture on my part, without getting under the hood there's only so much you can say.

I don't know what other people's problems have been but the support staff has been ON POINT so far. Fast and helpful.

I'm excited for a new Deep Enrichment campaign they appear to be working on.

It would be cool to have an option to leverage and schedule AI generated posts.

Why 4 stars and why I'm sticking with it: It automates exactly what I was looking for at the time. Connecting with more people. Not only does it automate it, it automates it REALLY well. Only thing maybe missing on this is the conditional statements to the messaging piece, but I can live without that for now.

The dev group, has me excited. I think there's some real potential here, and I love the thought of being an early adopter on this one.

Take this all with a grain of salt though; I haven't used other automation apps before, and I don't think I will at this point either.

All our deals are time-sensitive! Make sure you don't miss any of our awesome limited-time offers.